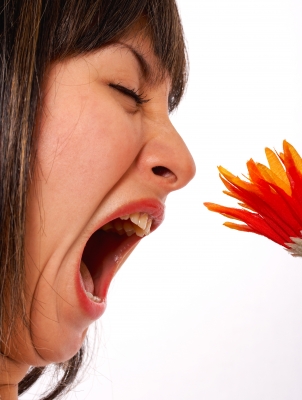 Histamine is a natural substance produced by the body and is also present in many foods. It is released by the body during times of stress and allergy.

In an allergic response, an allergen stimulates the release of antibodies. Mast cells release histamine  which may cause one or more of the following symptoms:

Histamine is a vasoactive amine which causes dilatation of the blood vessels (flushing, rashes, itching) and increased mucus production (runny nose, productive cough), and bronchoconstriction (wheezing, cough). Because histamine is contained in almost all body tissues, especially the lungs, nose, sinuses, skin, intestinal mucosa and certain blood cells (mast cells, basophils), it is able to cause a wide variety of symptoms.

There are many foods that contain histamine or cause the body to release histamine when ingested. These types of reactions are food intolerances, and are different from food allergy in that the immune system is not involved in the reaction. The symptoms, however, can be the same as a food allergy.

Foods that contain the chemical tyramine can trigger headaches. Foods that may have large amounts of tyramine include: fish, chocolate, alcoholic beverages, cheese, soy sauce, sauerkraut and processed meat.

Fermented foods may cause allergy symptoms because they are either rich in histamine or because yeast or mould is involved in the fermentation process.

Histamine liberators: (these release naturally occuring histamine in the body)

Debatable, these can cause problems in some people, but not in others. It would be worth keeping them out of the diet while you’re reducing histamine load;

One thought on “Histamine Levels and Allergies”

[…] of which foods you can tolerate and which ones you can’t. Histamine levels in food; https://equilibriumnaturalhealth.com/2016/02/29/allergies-foods-and-histamine-levels/ Salicylate levels in food; […]